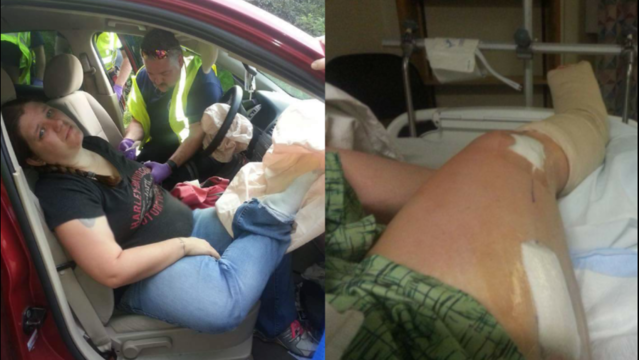 So many of us hate to see it: Passing by another car on the highway just to see a pair of bare feet up on the dashboard, and at times, even hanging out of the window. Sure, it may be the most comfortable way to sit for that individual in the front seat, but it can be a slightly off putting visual. Little do most people know that it is also one of the most dangerous ways to sit in a vehicle, especially in the front seat.

In 2017, CBS shared a gruesome example of exactly what could happen when passengers decide to sit this way. Audria Tatum shared her story of how keeping her feet up on the dash changed her life forever after a bad car accident that left nearly the entire right side of her body broken. She is no longer able to stand for more than 4 hours at a time, and the injury has severely affected her career as an EMS.

Millions of people, just like Audria, believe that if there was ever anything unexpected to happen, they would be able to put their legs down in time. Yet at some point, we must all acknowledge that life doesn’t give you ample warning before such a dramatic event. The experienced North Carolina personal injury lawyers at Riddle & Brantley have provided the risks associated with sitting in a vehicle with your feet up on the dashboard and why you should stop the habit altogether.

The Risks of Keeping Your Feet on the Dash

One of the very first – and most important – things you need to know about sitting this way is, aside from the risk of injury due to a collision, there is the possibility of becoming injured due to an airbag being deployed. Airbags have been recorded to deploy at a minimum speed of 100 mph and a maximum of 220.

After Audria’s crash, the Chattanooga, TN Fire Department issued a public statement, warning passengers that at this speed, “[If] you’re involved in an accident, the airbag may send your knees through your eye sockets.” Though everyone else in the vehicle walked away with only a few bruises and scratches, Audria was left permanently disabled after the airbag forced her foot into her face and resulted in a broken nose, femur, and four fractures in her ankle.

In addition to these injuries, Audria’s hips were severely injured, one was totally broken while the other was dislocated and shifted to the opposite side of her body. All of this occurred on just a short drive only a few miles away from home.

Another victim, Grainne Kealey, now lives with a permanently deformed skull due to an injury she incurred in 2007: Every single bone in her face was broken when an airbag was expelled and forced her knees into her forehead. She also suffered a minor brain injury and lost two teeth.

Your airbag isn’t the only thing to be wary of when you’re sitting with your feet up on the dash, however. Here are a few more possibilities of what could happen if you continue to sit this way:

These are only a handful of the risks of injury when a passenger keeps their legs on the dashboard. There are so many more things that could happen that we simply can’t be prepared for all of them, so taking safety precautions before anyone experiences any injury is best. Sitting straight up against the seat with your feet down and flat on the floor is the best way to prevent such injuries from happening.

Because of how simple this behavior is, not many people are aware of just how risky and even life-threatening it can be. After all, many people do it not out of spite for people who don’t feel comfortable seeing feet hanging out of a car window, but because it’s simply the most comfortable position. On long car rides, it can be a seemingly great way to stretch out your legs. Still, such a fleeting comfort is not worth an injury that can quite literally change your entire life. Having a driver or another passenger in the vehicle who is aware of the risks can save someone’s life and limb.

This is especially important for new drivers such as teenagers if they happen to have a passenger who is also young or generally unaware of the risks associated with sitting with your feet on the dashboard, there is little they can do to prevent the habit or properly warn their friend.

If you are driving a vehicle in which your passenger is sitting this way, kindly remind them that it is a significant risk to their safety. Explain that the risks are not dependent on the speed at which the vehicle is moving, or the type of vehicle that might collide with you. Anything can happen when out on the road, and we are all responsible for doing everything we can to keep each other and ourselves safe.